Late in the evening of 22 July 1917, four Australian nurses were working at the 2nd Australian Casualty Clearing Station, in Trois Arbes, France, when it was bombed by enemy aircraft. In an act of great bravery, Sisters Mary Jane Derrer, Clare Deacon, Dorothy Cawood and Alice Ross-King heroically rescued patients trapped in burning hospital tents. Witness accounts describe nurses running to tents shattered by bombs to rescue patients, either carrying them to safety or placing tables over patient’s beds in an effort to protect them. All four women were subsequently awarded the Military Medal for their heroism. It was the first time the British award for ‘bravery and devotion under fire’ had been bestowed on nurses in any theatre of war. 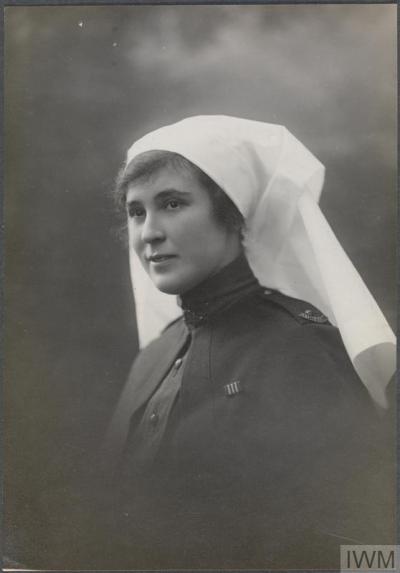 Commanding Officer, Lt. Col. J. Ramsay Webb, recorded the basic details of the incident in an Appendix to the unit’s official War Diary.

I have to report the following incident at this Station. On the 22nd instant at about 10.25pm an enemy aeroplane flying low over the Station dropped two bombs. The first fell at the rear of Ward C.5 blowing a hole in the ground about 15ft in diameter and 6ft deep in the centre. Ward C.5 was made up of 4 small hospital marquees arranged in a square. Of these one was completely destroyed and the three others rendered unfit for service. Some equipment was destroyed. The mortuary is also wrecked, the roof and two sides being blown out. Two patients and two orderlies were killed and many of the men were wounded. The second bomb dropped outside the southern boundary of the Camp near the Cemetery. The total casualties were 4 killed and 15 wounded. – Lt. Col. J. Ramsay Webb

Sister Alice Ross-King recorded a personal account of the bombing in her diary, which provides us with an insight into what Sister Mary Derrer may have experienced on the night of the bombing. Here, Sister Ross-King describes running along the ‘duckboards’ towards one of the hospital tents, which contained a patient named Gilmore, who was suffering from pneumonia.

I raced on and the next thing I knew I went over into a bomb crater. I shall never forget the awful climb on hands & feet out of that hole about 5ft deep greasy clay & blood tho I did not then know that it was blood. It was right in front of Gilmore’s tent – which was 3 marquees joined together, with about 46 stretcher cases in it. The tent had collapsed and though I shouted nobody answered me or I could hear nothing for the roar of planes and Archies – I seemed to be the only living thing about. – Sister Alice Ross-King 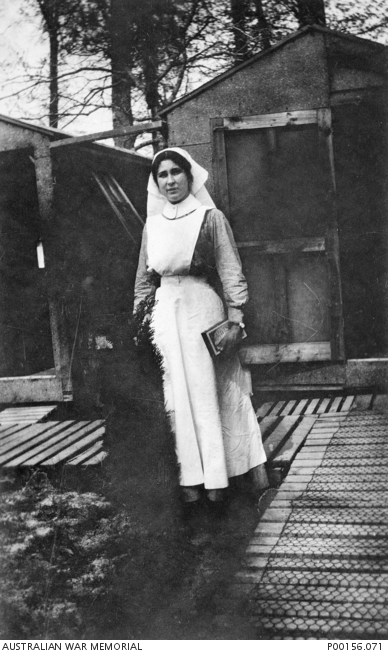 Mackay-born Mary Jane Derrer trained as a nurse at the Mackay General Hospital between 1910 and 1913. In 1915, at the age of 24, she enlisted for the war effort and saw service in Egypt, England and France. She returned to Australia in September 1917 and was discharged in December.  She re-enlisted in March 1918 and subsequently saw service in India. She returned to Australia in November 1919 and for a short time nursed at the Kangaroo Point Military Hospital. She continued her profession as a nurse in Mackay at the Lister Private Hospital.