When Sarah Wheelhouse was 89 years old, she told a reporter from the Bowen Independent newspaper that during her time as a midwife she had probably delivered as many as 500 children, “and most of them without the assistance of a doctor”. This was 1950 – three years before her death. Sarah gave the reporter enough first-hand information to write more than 1,600 words on her life, and with it, an incredible account of Bowen dating back to the mid-1860s.

Sarah Ann Mottershead was born in 1861 in Manchester, England, to parents William Mottershead and Jane Gibson. When Sarah was four years old, the family emigrated to Australia, arriving in Bowen in 1865. In 1879 Sarah married a solicitor’s clerk named William Hicks Wheelhouse and by 1891 they had six children. In a pioneer settlement such as Bowen, when doctors were few and medical attention might be miles away, Sarah took an interest in nursing and midwifery and soon became matron of the Immigration Depot, a position she held for five years. In 1903 Sarah was listed on the electoral roll as a nurse, living in Dalrymple Street, Bowen.

Nurse Wheelhouse may have been untrained, but she was obviously highly skilled, because in 1898 she took an experienced Welsh-born nurse (who was later known as Mrs Brown) under her wing when the woman emigrated to Australia. Either the future Mrs Brown had a family connection to Nurse Wheelhouse, or else she was satisfied that the untrained midwife’s reputation was such that she could overlook her lack of formal qualifications.

By the time the Queensland Government enacted legislation to regulate the activities of nurses and midwives in 1912, Sarah may have been practising as a midwife for twenty years. Evidently she was experienced enough to satisfy the requirements for registration, as she is listed in the Register of Midwifery Nurses (held by Queensland State Archives), which shows she paid a registration fee of 10 shillings in December 1912.

The Bowen Independent reported on the efforts of Nurse Wheelhouse during her days as a midwife:

“Mrs. Wheelhouse… estimates that she brought five hundred children into the world, most of them without the assistance of a doctor, and never lost a case. Her home was often a nursing home for her patients, but in most cases she went into the mother’s home, and was nurse, housekeeper and nursemaid for the family until the mother was about. She travelled as far as the Elliott River to attend confinements, once camping with a fettler’s wife, doing the cooking, baking the bread, minding the other children, and even milking the goats. She has waded across Magazine Creek to attend cases at the Pilot Station, and walked to the Don to others. She attended the birth of five sets of twins.”

In 1916, Nurse Wheelhouse was advertising her lying-in hospital “Kia Ora”, in William Street, with “accouchement cases a specialty”. By this time, she was 55 years old. The last birth notice in the Bowen Independent to mention Nurse Wheelhouse in attendance was in 1919, though she may have continued to work as a midwife for some years after that. By the early 1930s, Sarah was reportedly an invalid, though she lived at William Street for the remainder of her life. Within the Bowen community, Sarah was deferentially referred to as “Nurse Wheelhouse” right up until her death in 1953, at the age of 92. In death, she was described as a “grand old lady” whose life was spent in the service of others. 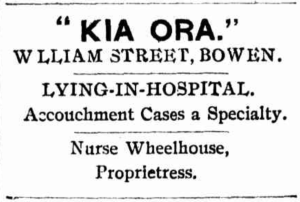